Starting your own business can be met with a great deal of scepticism. When I founded IsaTonic, many of my close friends and family questioned my decision. Why leave a steady job for an uncertain venture? It turned out to be a huge success, however. Details of my success can be found in my eBook:


Get My Free Network Marketing eBook!

Get my free eBook: How to Succeed in Network Marketing
See how I retired from the 9-5 at just 29.

If you’re facing criticism from people around you about your decision to start a multi-level marketing business, take solace in the fact that you’re in good company. MLM is endorsed by successful businesspeople around the world. 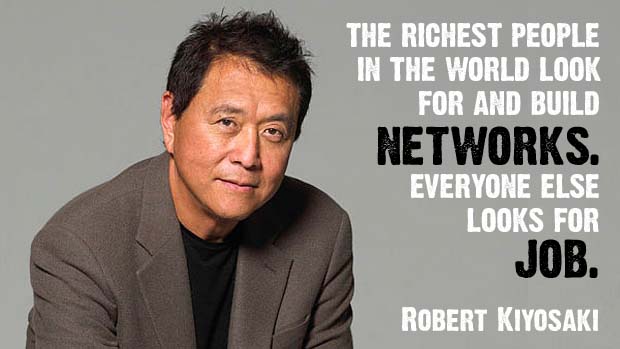 Here are 5 business legends who have gone on the record to support network marketing:

With all of his successful investments, you may be surprised that Buffett calls purchasing a network marketing company “the best investment I’ve ever made.” Berkshire Hathaway owns three of the most successful network marketing companies in the world: The Pampered Chef, Kirby (manufacturer of vacuum cleaners sold door-to-door), and World Book (creator of the famous encyclopedia series.)

Robert Kiyosaki has spoken at length on several occasions about the advantages of multi-level marketing. Over 10 years ago, he appeared on The Oprah Winfrey Show to explain why people should join a network marketing organization. Since those first appearances, he’s gone on to write a book entitled The Business of the 21st Century, detailing how to build a successful network marketing company. I can’t imagine where I’d be if I’d taken Robert Kiyosaki’s advice 10 years ago!

In 1997, Bill Clinton endorsed network marketing in his remarks to the Direct Selling Association. President Clinton stated that “You strengthen our country and our economy not just by striving for your own success but by offering opportunity to others… Your industry gives people the chance, after all, to make the most of their own lives and to me that’s the heart of the American dream.”

One branch of the Virgin Group that often goes unmentioned is Vie at Home, a network marketing company formerly known as Virgin Vie. Vie at Home made over $60 million its first year of existence, proving that you can find immediate success in network marketing.

Now tell me again, who is going to be able to argue with an entrepreneurial genius like Richard Branson?

The Donald is known for a successful entertainment career with his television show The Apprentice. With so much experience around the camera, it’s no wonder that he’s proven a powerful advocate for network marketing. In a famous interview on The Late Show with David Letterman, Trump stated the following:

David Letterman: What would you do if you lost everything and had to start over from scratch?

Donald Trump: I would find a good network marketing company and get to work. 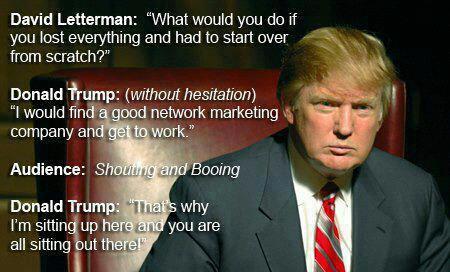 Trump has dabbled in more industries than perhaps anyone on this list. Even with all of his business exploits, Donald Trump argues without hesitation that network marketing is the fastest way to create a successful business and build wealth.

Network Marketing is the Business of the 21st Century!

Keep in mind, these are only some of the most successful entrepreneurs who have gone on the record endorsing multi-level marketing! Countless millionaires can credit their success and wealth to involvement in a network marketing company. Take the advice of these entrepreneurial legends and start your own business. In a few years I may be quoting you on this blog.